The Park of Military History is a new museum and tourist centre located in the old Pivka barracks complex. The barracks were built by the Kingdom of Italy around 1930 in order to defend the Rapallo border. From 1945 to 1991, the barracks were home to the Yugoslav People’s Army.

The Park of Military History has been developing within the complex since 2004. Over the last couple of years, the Park of Military History has experienced an intensive development and quickly became the largest museum complex in the Republic of Slovenia as well as one of the largest military-historical complexes in this part of Europe. It displays various museum exhibits and diverse museum collections which offer visitors a unique insight into Slovenian national history as well as world history.

The Komanda Premise is a former Command Centre and the current entry point of the Park of Military History. Nowadays, it houses a tourist information centre and a well-stocked museum shop. Two multimedia rooms and a conference room are located on the first floor while the second and third floors were rearranged into an exhibition area.

The upper rooms host the exhibition Regio Carsica Militaris, which presents a several-thousand-year-old fortification heritage of Slovenia, and the recently opened exhibition “To Hell and Back”, which focuses on the story of the downed American aircraft over Slovenian territory in the Second World War. The Park of Military History is also the first in Slovenia to host a permanent archery collection displaying the evolution of bows and the role of archery. The exhibitions in the Komanda Premise are complemented by the collection of various maps, displayed on the staircase walls, presenting the Slovenian territory in the 20th century. The Komanda Premise also hosts various temporary and visiting exhibitions.

The visitors can rest and have lunch in the museum restaurant Kantina Pivka. 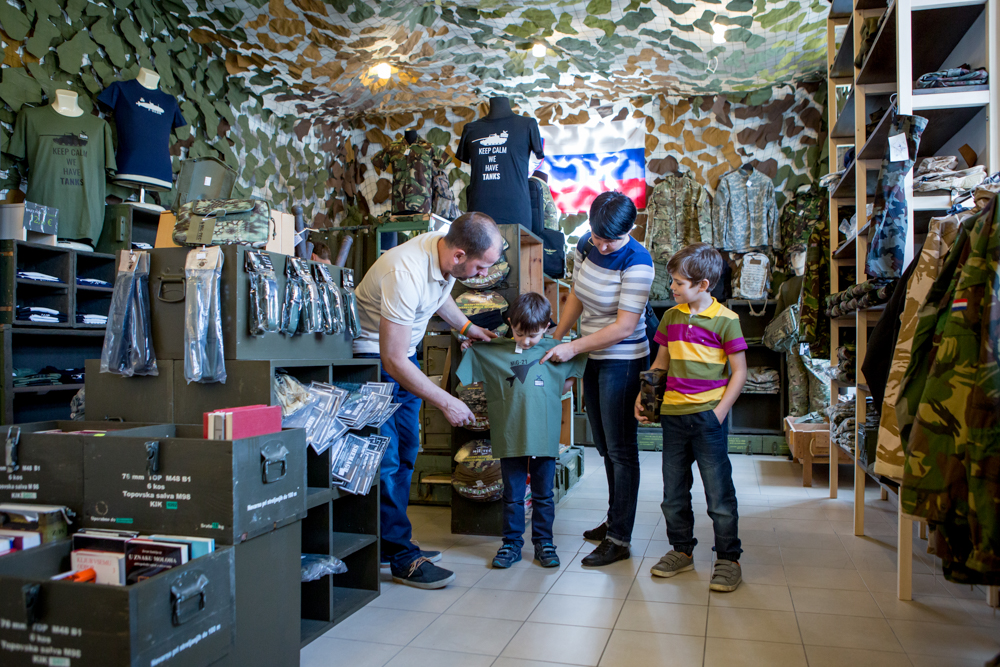 The central part of the Park of Military History is the exhibition entitled “The Road to Independence” presenting the process of gaining independence in the Republic of Slovenia with an emphasis on the independence war of 1991.

The exhibition outlines Tito’s Yugoslavia as a federal state, a part of which was also the Socialist Republic of Slovenia, and introduces the Yugoslav People’s Army as the key bond with an enormous influence on the development of the state. The central focus of the exhibition is to present the main social and political events and changes in the 1980s and 1990s which resulted in Slovenia declaring its independence from Yugoslavia. The exhibition also presents the ensuing brutal military intervention of the Yugoslav Army over Slovenian territory and a strong resistance from the Slovenian Territorial Defense and the Police Force due to which Slovenia successfully protected its independence.

The exhibition enables the visitor to relive war events through direct contact with some important exhibits from that time. The exhibition displaying the advance of the Yugoslav unit includes the MiG-21 aircraft, the M-84 tank and the BVP and BTR armored vehicles. The important “relics” of the 1991 war are also the Gazelle helicopter “Velenje TO-001”, being the first aircraft to defect from the Yugoslav Military Air Force, and the T-55 tank, which was part of the tank unit that spearheaded the aggression of the Yugoslav army from the Pivka barracks. The collection also comprises several other army vehicles from that period.

The exhibition “The Road to Independence” was recently complemented by the 3.6-metre-long and 1.6-metre-wide scale model of the former Yugoslav underground military airbase “Željava”. The newly acquired exhibit piece illustrates the mightiness of one of the largest military infrastructure projects in the former Yugoslavia which was until recently wrapped in a veil of mystery.

The main collection of the Park of Military History is a national tank-artillery collection. Aside from the vehicles from the Slovenian liberation war in 1991 and the vehicles from the Slovenian Army, the collection also comprises tanks and cannons from the Second World War, namely from the First and Second Tank Brigade, as well as vehicles from the period of the American military aid to former Yugoslavia in the 1950s after the Tito-Stalin dispute, which brought the expulsion of Yugoslavia from the bloc of communist countries bound to the Soviet Union. Among the more attractive Second World War-era and post-war armored vehicles in the collection are the American M3A3 Stuart tank, the Soviet T-34/85 tank, the American M4A3 Sherman tank, the M36 Jackson self-propelled gun, the Scout car and the M8 Greyhound armored vehicles, as well as the post-war American M47 Patton tank as the heaviest tank in the collection of the Park of Military History.

The collection of military vehicles is constantly being complemented by attractive newly acquired exhibit pieces. Three of the most recent additions were the British Bren Carrier transport vehicle, the American M7 Priest self-propelled howitzer and the American Harley-Davidson WLA motorbike, all of them dating from the Second World War and presenting part of the equipment of the Yugoslav partisan units.

The Park of Military History also houses valuable artillery pieces. The collection includes some extremely attractive artillery weapons, such as the American and British licensed versions of the Bofors 40 mm guns from the Second World War, the Yugoslav M55 20/3 20 mm and the German Flak 30 and Flak 38 guns as well as the legendary German Flak 88, representing one of the best artillery weapons of the Second World War. The Soviet SU-100 is a valuable example of a tank destroyer, while the heavy artillery is represented by the American 155 mm “Long Tom” howitzer.

Two American gun-towing vehicles are also on display, namely the M5/M5A1 half-track and the M5 HST towing tractor. The Soviet artillery from the Second World War is represented by the ML-20 152 mm howitzer and the famous ZiS-3 76.2 mm, while the Yugoslav artillery is represented by the M-48 B1 76.2 mm mountain gun and the M-63 “Plamen” 128 mm multiple rocket launcher.

On display in the Park of Military History are also several military vehicles from the period after the Second World War and from the period of the Cold War, which were at one point used by the Yugoslav People’s Army. Among other vehicles, the collection includes two tanks – the Soviet T-72 and the Yugoslav variant M-84, which presents the greatest success of the Yugoslav military industry. Other vehicles in the collection that also stand out are the Soviet 2S1 “Gvozdika” self-propelled howitzer, the Soviet ZSU-57 57 mm and the Czechoslovak Praga M53/59 30 mm self-propelled anti-aircraft artillery, the BVP-M80A infantry fighting vehicle, the Soviet BTM-3 trench-digging machine and the tank simulator on the basis of the T-55 tank.

The Park also has an aircraft collection. It consists of three fighter aircraft, the American fighter-bombers F-84 Thunderjet and F-86 Sabre, which were brought to Yugoslavia within the framework of the American military aid in the 1950s, as well as the Romanian IAR-93 Vultur/Eagle. Another exhibit piece from the aircraft collection is the Yugoslav SOKO 522 trainer aircraft, constructed at the SOKO Mostar factory under the guidance of Slovenian engineer Ivo Šoštaršič. The famous Soviet MiG-21 jet fighter and interceptor represents the aircraft used during the war for the independence of Slovenia in 1991. Aside from that, visitors will also learn about an interesting story of the helicopter Gazelle TO-001, which happened during the Slovenian liberation war in 1991.

The 19-metre-long and 76-tonne P-913 Zeta sabotage submarine is still one of the most attractive museum exhibits. This small so-called pocket submarine of the Una-class was one of six submarines constructed in Split in the 1980s with the purpose of enlarging the Yugoslav submarine fleet. After their construction, the Yugoslav Navy gained the fleet of commando submarines suitable for performing a number of tasks in specific conditions of the Adriatic Sea. Aside from the basic crew of four members, the submarine could also transport up to six submarine commandos as well as up to four underwater vehicles R-1 or naval mines.

The P-913 submarine is an extraordinary example of military technical heritage. Slovenian experts and the country’s industry greatly contributed to its construction as well. The submarine is also a monument to generations of Slovenian submariners who represented a substantial share of the Yugoslav Navy. 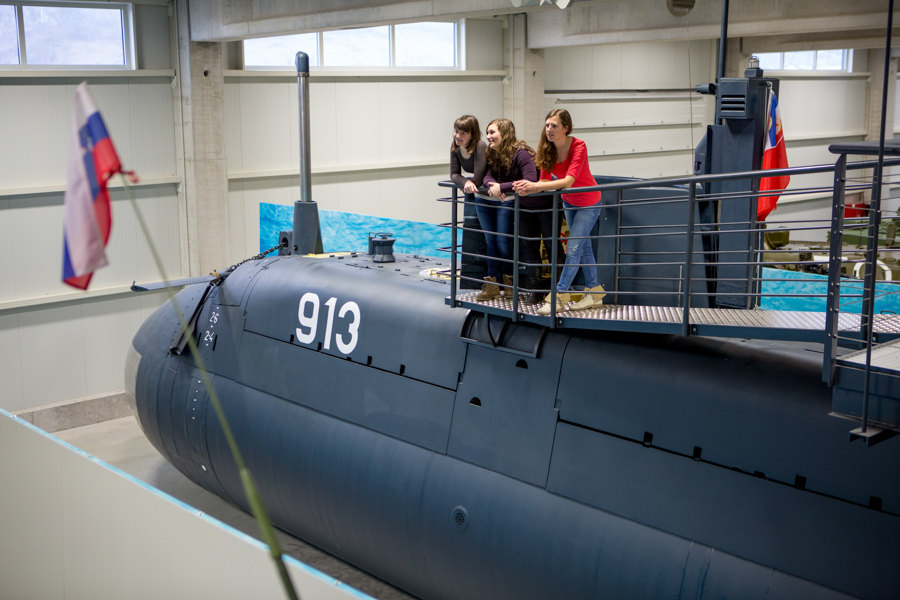 Technical heritage enthusiasts will also be impressed by the currently largest and heaviest exhibit piece in the Park of Military History – the German military steam locomotive 33-110 from the Second World War era. The 95-tonne and 23-metre-long locomotive was first produced to serve the German war machine, only to turn into a peaceful locomotive that greatly contributed to the reconstruction of Europe afterwards. Its transformation occurred after the end of the Second World War, when the 33-110locomotive  arrived in the former Yugoslavia as a part of the war reparations. The 33-110 locomotive is especially important for the national technical heritage since it is the last steam locomotive in Slovenia to be used for regular railroad traffic until its retirement in 1978. 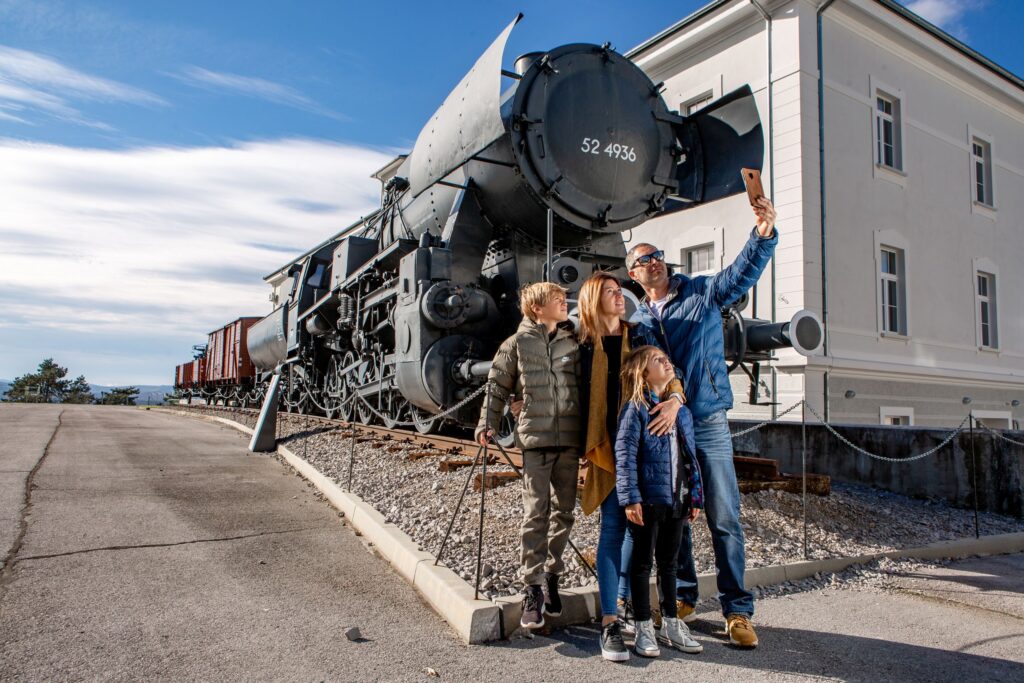 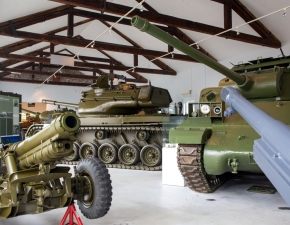 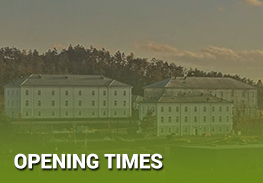 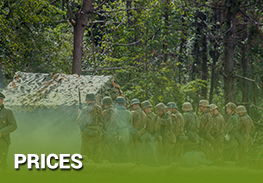